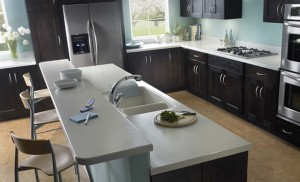 Like father, like son. Take, for instance, Michael Beasley who set up shop in Columbus, Ohio more than 35 years ago under the name of Distinctive Surfaces, Inc., specializing in laminate and solid surface countertops. His son, Mike Jr., grew up in the business, literally learning the business of countertop fabrication at his father’s knee. Then, 18 years ago Mike Jr. moved to Sarasota, Florida and started Distinctive Countertops of Florida, also specializing in laminate and solid surface countertops.

“We branched out into granite and quartz surfacing when those products caught on,” he explains. “Now we do virtually all the products, all the brands – except for laminate and cultured marble.”

Once established, Beasley concentrated on building up the company in Sarasota, using the tried and true business philosophy taught to him by his father. “The quality has to be there,” he says. “Turnaround time has to be there. You have to stick with what you say. If you have to be there on Tuesday, you damn well better be there on Tuesday. You have to treat people with respect, regardless of the size of the project. I’ve always been the kind of guy that believes if I do a good job on someone’s bathroom this year I’ll end up doing their kitchen next year.”

That philosophy seems to have worked. So much so that about four years ago Distinctive Surfaces of Florida began its strategy of growth through entering new markets. It opened additional facilities in Tampa, Ocala and Tallahassee. Remember this was in the midst of the Great Recession – in Florida – a state that was particularly hard hit by the economic downturn.

“We started each of these locations from scratch,” Beasley says in his typically understated fashion. “We are as far north as Tallahassee. I’ve got some good people in place and I’m rarely up there myself. Two of the four are fabrication shops, one in Tallahassee and here in Sarasota. We cover a little of Georgia, some of Alabama and most of Florida.”

Although the company has bridge saws and a CNC in place for stone fabrication, Beasley says his company hasn’t put a lot of emphasis on automation. Much of what makes this company successful is the quality of its people.

You Have To Know How To Hire

“We have about 60 employees and we definitely feel we have the right people,” says Beasley. “It can be challenging, though. There is an interview process that we go through and we hope that we get the right people. If we don’t, we realize that pretty soon and make the necessary changes. There are still tons of people unemployed, so it’s not difficult to find people right now. It hasn’t been for the last few years.”

Distinctive Surfaces currently uses JobTracker as a contact management, quoting and scheduling tool for its four operations. Soon, the company will be using the software for tracking inventory. “We have a different system now,” Beasely says, “but after the first of the year we will be using JobTracker for the inventory system as well.”

And what does the future hold for such a vibrant and forward-looking company? “We are in talks right now about opening another location,” says Beasley.